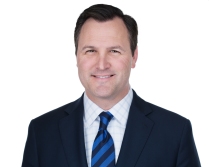 Dan Hamilton began his real estate career in 2002 and became a founding partner of Keller Williams Realty Greenville-Upstate in 2003, helping to launch the very first Keller Williams franchise in South Carolina. He became the Operating Principal in 2006 and helped grow the market center to over 200 agents, along the way making it the most productive real estate office in the Greater Greenville MLS by sold units and consistently ranked in the top quartile for profitability within the Keller Williams system.

Additionally, Dan is the founder and Rainmaker for Hamilton & Co., a real estate team that consistently sells over 200 homes a year and has been recognized by The Wall Street Journal and RealTrends as a top team in South Carolina.

Dan was elected to the South Carolina House of Representatives in 2008, representing a portion of Greenville County. He serves on the Labor Commerce & Industry Committee, is a Majority Whip and founded and Chaired the Upstate Caucus.

Dan holds a B.S. in Organizational Communications. He was named by Greenville Magazine Best & Brightest 35 and Under in 2008 and is a graduate of Leadership South Carolina, class of 2013. He and his wife Kelly have been married for 17 years and are the parents of four children.